Tweet
Estes Park
Estes Park is an awesome place to visit in the Rocky Mountain National Park. During the winter season there is limited camping and the only campground, this past winter, that was open was the Moraine Campground.

It is twelve dollars a night for a campsite. Totally worth it. My best friend from home came to visit and this is where the adventure begins!

We drove up from Denver about an hour and half drive to the park.

Our first destination, after stopping at Sprouts to get snacks, was to the outdoor store in Estes Park. It's about twenty five minutes from the campground. Since it was still March we needed snowshoes. We rented them for six buck a day, not a bad deal!

We then headed to the campsite. We drove around the circle of sites a few times to make sure we landed the best spot. It was not crowded which was nice, most likely because it was still cold.

We found an awesome lot, lot #19. It had a panorama view of the mountains and was sheltered by a few trees. We set up the tent under a nice big tree. It was cute.

The Sun is Setting

Since there was still snow on the ground we did not set up on the block of pavement because we did not want the snow melting toward our tent in the middle of the evening and the grass near the tree was clear of snow.

This was our kind of a girls night.

We cracked open some Sierra Nevada, laid back on a blanket, and watched the sunset behind the mountains.

It is in these scarce moments of life, when we find it so hard to stay in the moment, that are incredibly beautiful.

Val and I reminisced on old times and how obnoxious we were, wondering how we both decided to be friends with each other considering how we were such weird and bizarre little children.

We sat in silence as we breathed the mountain air both speaking to one another through the silence as we listened to the nature converse our thoughts.

The sun began to set, the wind started to pick up and it was time to start the fire and roast those s'mores.

Val got the fire started as I unscrewed the wine bottle and got the s'mores ready to roast. It was like a spell was cast on our bodies; we were uncontrollably happy and content in the moment of life.

It was a wonderful thing.

In between our moments of silence and contentment we would grow curious and talk about random things. Ask each other random questions. Like what is the ideal man for us. What do we really want to do with our lives? Questions we don't quite know the answers too, mysterious thoughtful questions that lead to unknown wanted answers.

We cheers to life bringing us together as we sip our wine giggling to each other.

Suddenly we our abruptly taken away from our thoughts as three young males approach us.

"Hi how are you?" I say cheerfully.

"Hi, our campfire seems to be nonexistent so we brought over some marshmallows if you would like some, there a little frozen though." The most outspoken of the three says.

"Oh okay thanks we actually have our own if you want some non frozen marshmallows you're welcome to them. We found sticks somewhere around here." I point to the trees.

"Thanks." The three guys help themselves to a marshmallow.

I personally think this is kind of hilarious, but Valen soon gets annoyed with them. And after I think about it I don't blame her.

We are trying to have a girls night and they crash our campfire, not adding anything to our conversation or night, we offer them marshmallows, our fire and our wine.

And one made a rude comment about how we were drinking cheap wine. Well excuse us, go get your own! And he still drank it.

I excused myself from the tent and I went to change into warmer clothes now that the sun was gone and the breeze was picking up. I am laughing to myself, maybe tipsy maybe not, and thinking about how funny it will be if I sneak Val an edible while we are talking to these guys.

And so I do just that.

The guys, overall, were pretty negative and I was getting tired of their foul moods. Apparently they are not campers and got in trouble with their parents and have to leave bright and early tomorrow. They took one of their mom's car and drove from Tennessee.

They are on spring break at a college in Memphis, all computer science techies. Which I found super cool, I wish I had a knack for technology! I was totally into the conversation.

But they were definitely sending their negative vibes our way, and we were not having it!

So the fire starts to dwindle and it was pretty hilarious because Val was like, "Roast as many marshmallows as you can before the fire goes out!"

And so Val and I made probably six s'mores each within ten minutes and stuffed our faces in front of them.

We probably made them feel awkward, but we did not care. Yes it may have been rude to not offer them any, but hey they were not kindest either.

We looked like fat asses, but we did not care.

They eventually lollygagged over to their tent.

We rejoiced in happiness and laughed at how obnoxious we were.

Soon after they left the fire died and we gathered our belongings and put them in the car to protect ourselves from the bears.

The glove was strange, it was a black stiff glove with the palm side facing up.

We started to think that this could be a horror story, where two young girls are camping and three psycho guys find them, get to know them, and then murder them. And we were the girls!

We thought it was strange that there fire went out and that they came over to ours without going to get more firewood before the store closed.

Considering it was only a little past six when they came over. And then they gave off bad vibes. And to top it off, they purposefully leave "their mark" as murders by forgetting one glove!

I am having this nightmare of a dream. I am sleeping in the tent and this nightmare becomes real. I hear footsteps outside and the wind is shaking our tent. It is one of the three guys we met earlier.

Before I could even think he is in the tent choking me with both his hands. I can not breathe. I become anxious that I will not be able to speak because I am so scared.

I wake up. I jump to a seated position and look around.

My heart is pounding like one hundred times a beat of a drum.

I can barely catch my breathe. There is nothing unusual.

Val stirred awake as she moaned and turned to face the other side of tent.

She was out cold, the wine and edible did her well.

I hallucinated. I have hallucinated three other times in my life and all three times I woke up the person in the room with me. Except this time.

I calmed down and realized I might have just woken up the campsite and chuckled to myself.

The Sun Is Rising

As the sun rises we wake up slowly and groggy. I am up quicker than I normally would be because I have a final being emailed to me to take online. My professor was nice enough to let me take it out of the classroom, which allowed us to camp. Pretty awesome deal.

We pack up our campsite and head into town. We go to this cafe so I can take my exam. It takes me about an hour and half to complete and send over to my professor.

Time for some snowshoeing!

We head back to the Rocky Mountain National Park on Bear Lake Rd, which is where our campground was. We park at glacier basin parking lot, strap on our snowshoes, and hit the trail!

We ended up snowshoeing about seven miles of the park, we attempted to go to glacier gorge, but it was closed due to the weather so we ended up traveling to Sprague Lake, Bierstadt Lake and Bear Lake. We were not exactly sure at times where we were going, but we did not mind. 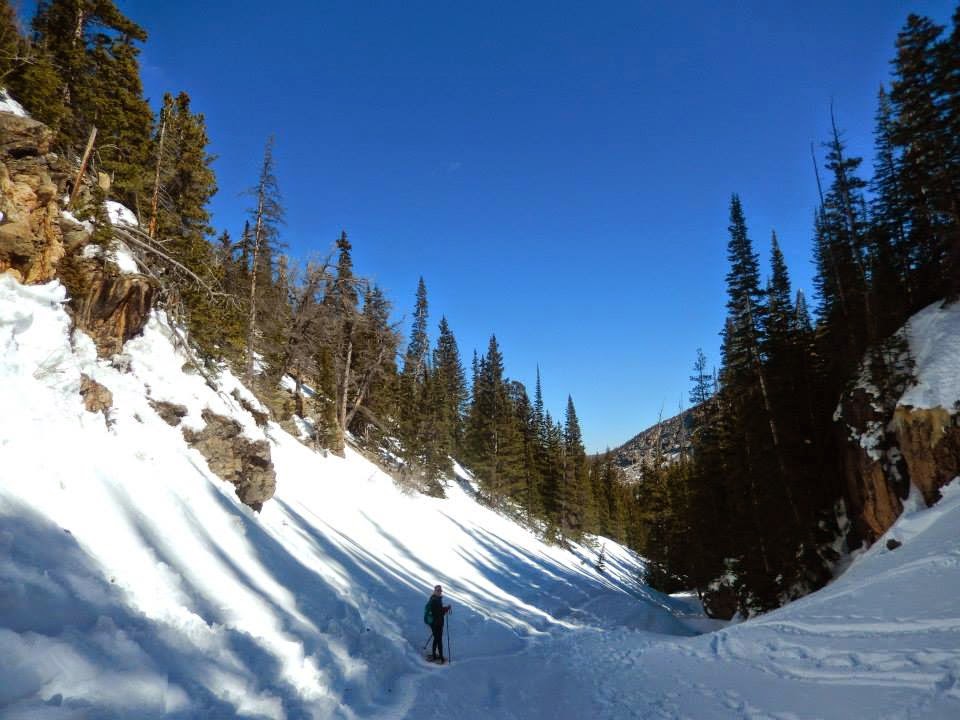 It was a beautiful day. Blue sunny skies. A day comfortable in pants, a long sleeve shirt, gloves and a fleece.

It was a wonderful day, and definitely the best way I have spent finals week!