Interesting morning to say the least. On the up side we didn't have meditation but still had to be up and about at 6.

We started the internal cleansing process this morning. It's called: Shatkarma. There are six types, shat in Sanskrit means six and karma means action. 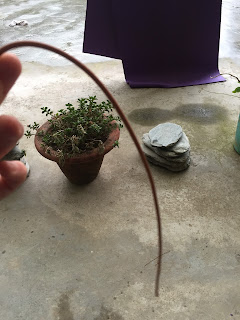 The goal of Shatkarma is to create harmony between the two major pranic flows, Ida and Pingala, thereby attaining physical and mental purification. They are also used to balance the three doshas: Kapha (mucus), Pitta (bile) and Vata (air).

We attempted three this morning. The first practice is called Neti, cleansing and purifying the nasal passages. The first was on jala neti, putting water through one nostril so that it comes out the other nostril in order to clean the naval passages. That was easy, but felt super weird and I had to blow my nose a few times.

Then was rubber neti, which is apart of neti. You have a small tube like string you twist up your nose and then reach your hand in your mouth to grab it at the throat and pull through like dental floss. I attempted both nostrils but both times my nose started to bleed so either I was being too aggressive and shoving it up wrong or my nose just didn't like it.


Some people got it and they would gag and tears would rush down their faces, it was intense. I was tearing up because it stung to get the tube up so high.

This is a way to get the mucus out and all the toxins that are inside.

After that, was Dhauti, an internal cleansing technique of the stomach. You chug warm sea salt water. You are suppose to chug 4-8 glasses and trust me, if you chug them fast enough you won't have any issues vomiting. And I did not.

It was nasty. At first I was slowly drinking it and then I realized that was doing me no good.

The night before you don't eat after like 2100. I had a grilled cheese and a piece of  banana cake (yes you're right, that is not apart of this vegan/ Indian/ yogi diet, but the Indian meals twice a day every day are getting old and getting to my stomach) so I was hungry for a grilled cheese and a sweet treat, so damn right I got it!!

Anyway, not the point. After vomiting quite a bit (it was incredible how much water came up when it seemed like four cups wouldn't do so much, but it did) I was feeling unsure of how my body was going to react to the aftermath.

But then we were required to drink a cup of warm milk... SICK. I do not like milk and when I'm in anatomy class I stare out the window to see the cows eating trash in their "field". So that was not appealing whatsoever.

Nevertheless it's important because we cleaned out the internal organs so we now need to build a wall inside to protect the stomach so milk is the solution, apparently.

I went for half a glass of soy milk. I told him I was not as big as the others so why should I have a glass as big as theirs? Valid I thought.

I went back to my room and the last thing I wanted was food. We had yoga class in a few minutes, which was not exactly what I wanted to do after throwing up my guts at 6 in the morning but Asana practice started at 730 so I was there.

The class began and I start to feel super ill, saliva was coming up like I needed to vomit. And the postures that are compression postures to the stomach like doing bujangasana, cobra pose, was not ideal.

I kept telling myself it's in the head, we're just doing a simple flow. But when the instructor started to adjust me to deepen my postures I was not feeling it. The reason I wasn't going so deep was because my stomach felt ill, granted she didn't know that but it was not helpful.

So I said to myself, "I'm usually not a complainer (I like to think so) and I am good with pain so I know when I don't feel good since it's not often". And my step dad once told me, "sometimes we need to take one small step back to finish three steps ahead."

I came to the conclusion something was not right and he's right, taking the mini step back to evaluate my body is the right thing to do which can lead me, in the end, to potentially be three steps farther.

I got out of the posture grabbed my key and left my mat.

I rushed to the bathroom in my room and vomited, more water and that mixture came out. Sick. (And there goes the point of drinking the milk)

I wanted to make sure it was all out though so that everything would go back to normal.

With that in mind, I made myself puke one more time, which really wasn't difficult because I was still not feeling well.

And with that vomit, some blood came out... Gross. And so no more puking for me. I laid on my bed and did not return to asana practice.

As soon as breakfast was ready I made myself three bowls of oatmeal and grabbed a mango and two bananas. My stomach, it seemed, was mad at me.

I was exhausted for the rest of the day. In the end, I am not going to do either of those detoxes again. It is not for me.

And in life, some things aren't for everyone and that is when you have to know your body and your body's limit.

Do I think this is a good detox? I think the nasal passage one to the other nasal passage is fine to clear the nose but otherwise I would say suitable for those that feel their body accepts it. Mine did not. And I may have tried too hard with the nose to mouth one but now I know it's not okay.

The rest of the day dragged on as I was fatigued from puking so much and with little in the stomach.

I ended up I skipping out on lunch and dinner since it is Indian cuisine every day, which is too heavy for me right now. And I'm too tired to walk a mile up a mountain to other food. Plus my stomach is not asking for much, just rest.

All in all, it was an interesting morning and an experience. I am not sure how well I'll do with the future cleanses but I'll give it a try because it is important to embrace other cultures, especially when you're in their environment.

Tomorrow is back to the same routine - meditation at 6 straight to yoga practice at 8 to breakfast at 930 to philosophy at 1030 to noon then unto lunch to posture break downs after at 1400 until 1530 for a fifteen minute tea break back at it at 1545 for a workshop until 1800, dinner time...

Overall, there's a lot to learn and in the next coming days we are studying the Ayurveda diet which I am excited to learn about and I will be sure to share those enticing details with you in the near future.

Until then, I am resting until morning meditation.